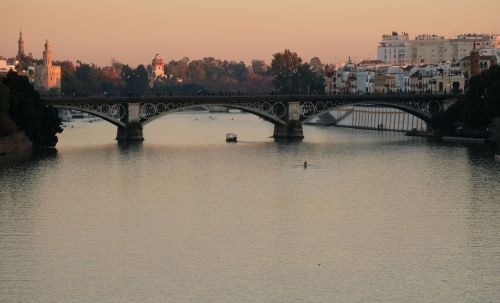 A day with Candy in Triana

I would like to introduce you to Candy, a woman born and raised in Triana, the Seville´s ceramic district and the place where you will find the most traditional professions. In this place you will find some historic buildings that are used by his neighbours in their everyday live. We cannot forget the bars from this area, they are here like since forever. Today Candy welcomes you in Triana, the treasure from Seville and she will show you how a regular day look like in her life: I go out from my house through the “zaguán” (it´s a kind of corridor that comes from the arabic word istawan). I´m saying it because in the andalusian houses it is so typical to have a zaguán in the entrance. As you can see, the tiles (azulejo, another arabic Word), are made in Triana, but with a hint of italian influence. Any other day I´ll show you different kinds of azulejos. Ok, let´s go! It´s 9 a.m. and before shopping and doing some errands, I´ll have breakfast. Do you like a toast with ham and a coffee? Me, of course. Some olive oil on my bread and the milk very hot, it´s how I like it. The fresh orange juice is included in the morning offer, but I don´t feel very well if I drink it. Patio de San Eloy, good quality, good prices and close to my home, that´s the reason because I usually choose this place. A short distance from my home, The Market of Triana, Mercado de Triana, saves my life: there is everything what I need, even more. This market is a very special place: an authentic melting pot during the day and with a remarkable nightlife, tells me the man from the fruit store. But why? Pedro tells me that this place was a morish Castle in the XIII Century and after that, the main location of the Inquisition in the XV Century, with a prison and everything. The nosises? The prisoner´s chains…but don´t tell this story to anybody because we want to attract the clients and not to scare them, says Pedro. Ok, stop messing around and tell me how the mango is today. Perhaps I´ll take the figs, after all, we grow them here! For tomorrow I´ll take half pound of the best jamón – ham in José Luis, because my son is coming to have dinner. Acorn ham from Jabugo (the pigs are fed basically with acorns, the pigs breed is Iberian, is the black one and of course is the best one. Jabugo is a village close to Seville), just for the special occasions. For everyday, I buy jamón de cebo (the pigs are grown with natural grass and high quality feeds), buy always from Jabugo. Alas, I just realized that I have to buy a new cruet. It´s a wonderful invention, hehe, the perfect drops for my toast. Thank goodness I have “Marina´s Cacharerría “, I don´t have to go to another place to buy it and she has literally everything. What an appropriate name for this stand: the definition of “cacharro” is banger, nest, pot, but here they fix even a pressure cooker. Under the same roof, there is Casala. Don´t you know it? It´s a theatre. Yes, just as you hear it, a theatre inside a market building. I will buy from Fernanado two tickets for this friday, I´m going with my daugther to a monologue. But they have a lot of things: magic, flamenco, concerts…check the schedule in the link. Everything is made with love and what I like most is that the place is very warm and I feel like the people around me is family. If you decide to go, ask Fernando about the story of how he decided to built a theatre inside a market. I never get bored listening to him. And now I have to go out . I´ll go to Saint Ann’s pharmacy, (Altozano square) because is the most beautiful pharmacy in Seville. Look at that and judge by yourself. The building is from 1913, it was made by an amazing architect from the Seville´s regionalism style, José Espiau y Muñoz (most of the buildings from the begining of the XX century, were made in this style, the ones that have a lot of ceramic and decoration… well, the ones that are beautiful), the first pharmacy that belonged to this family was opened in 1886. Look at that pots for medicines and of course at the azulejos.

It´s 1 p.m, so I have to prepare lunch, enjoy siesta time for half an hour (even the doctors recomend just 20 minutes) and I´ll be with you again outside. Close to my home, I go to the library in Pureza Street, called The Columns. I like to come here because I can picture the sailors who studied between these walls in the XVIII Century and gives me strength to focus in my reading. Also I like to go through the yard, before I reach the library.

In the same Pureza Street: wait for me, I´m going to talk for a sec with Jose, the restorer. I have to say that he’s also a carver. But just a while, because I don´t want to bother him in his work. It´s almost 8 p.m. I´m hanging up with my sister, we will go to Abacería Caña y Romero, because the Manzanilla is so good, and the way Jose Luis serves its is so funny. When I order Manzanilla I mean the wine, not the camomile tea, because we use the same word in spanish for both drinks, but one of them is funnier than the other, if you know what I mean, hehe A toast for you! In this point I have to say good bye, I loved to show you at least a part of my district. Some other day, I´ll show you the rest. I hope I´ll see you around!